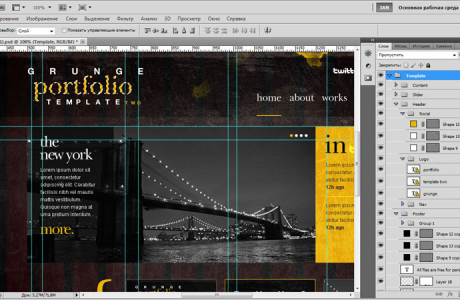 Site layout is the first stage of programming a web resource. At this stage, all the elements of the web resource, the design of which was developed earlier, are put together, transforming into the structure that will be displayed in the user's browser. This is one of the most important steps in building a site. Since it depends on the layout how the web resource will look, and ultimately its attractiveness and ease of use of the Internet resource.

Layout of web resources has two main types: rigid (fixed) and variable. In the first case, all elements of a web page always have fixed proportions when zooming in and on screens of different sizes. With a variable layout of the site, the elements are adjusted to the parameters of each individual screen.

Today html and css programming can be done using various methods and technologies, however, the most commonly used programming language is html and css, which uses several methods at the same time.

Website html layout methods
HTML layout. This method is based on the HTML hypertext markup language. It is divided into two main types:

CSS programming is a cascading table layout method. With this layout, it was possible to separate the various elements of the page and give them their own style independently of other elements. As a result, the style of text, background, individual blocks became independent of the source code.

Application sent! ×
Our manager will contact you within 10 minutes!
In the meantime, you can read articles that can help you in the future: